Hotspots for crimes against yachtspeople in St Lucia 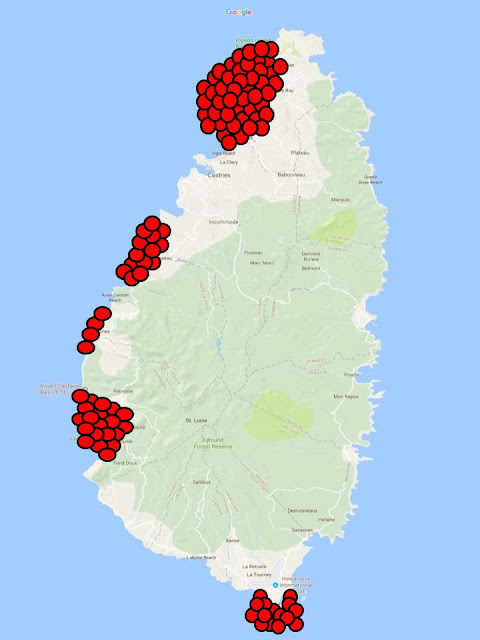 Yachtspeople travelling to the Caribbean would do well to visit the CSSN (Caribbean Safety and Security Net) website, which collects and disseminates information about crimes against cruisers in the Caribbean.

Over the last 10 years, CSSN has logged well over 100 crimes against cruisers in St Lucia, including armed robber, murder and rape.

We've mapped each report on CSSN's database to show the hotspots for crime against yachtspeople in St Lucia, which include areas of significant criminal activity in and around Rodney Bay, Marigot, Soufriere and Vieux Fort, where Roger Pratt was murdered on board his yacht in 2014.

Each red dot on the map represents a single incident and the approximate area in which it took place. It paints a grim picture for cruisers in St Lucia. We fear that there are many more incidents that go unreported.
Labels: Caribbean Caribbean Safety and Security Net CSSN homicide Marigot murder rape robbery Rodney Bay Roger Pratt Soufriere St Lucia Vieux Fort Yachting
Location: St Lucia