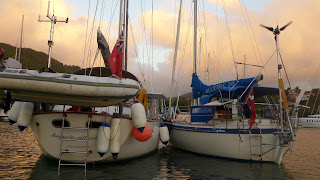 Good morning, my name is Margaret Pratt and I am talking to you because my husband Roger Pratt was murdered in St Lucia rather more than five years ago.

One of the things I want to say is to thank everybody for their real support over the past months, and particularly around this difficult period of the fifth anniversary of Roger’s death.

As you’ll know, I was out in St Lucia in December. I had some very productive and helpful meetings with a lot of people and I left very optimistic. Despite all the optimistic noises, the plans that the Director of Public Prosecutions had hoped to achieve of getting an early trial date didn't materialise before Christmas.

I heard yesterday from my attorney in St Lucia that the courtrooms have now reopened. They've been closed for nine months or so, which - of course - has built up a major backlog. I'm really grateful that the government has found the extra $1 million that was needed to complete the renovations of the courthouse.

A case management hearing has been scheduled for 8th March, although I'm not quite sure what will happen them. I understand that there will be some consideration of the fitness to plead and maybe, I keep my fingers crossed, the judge may feel able to also reschedule a trial date.


But who knows? I'll keep you posted, probably in another update in about a month's time.

The second thing that I wanted to pick up was to talk about the very sad murder of Bob Hathaway. Bob was someone that Roger and I knew, he ran at that time the marina in Marigot Bay. He was a nice man.

I was so sorry to hear of his murder in such unfortunate circumstances in January. My thoughts are with his family and his friends and I hope that there will be a speedy resolution in his case.

What the case does remind everybody of is the fact that St Lucia is a dangerous place. One of the things that has come out as part of all of our campaigning is this increased awareness, both on the island and in the wider community, of just how dangerous St Lucia is.

What is becoming clear, both in Roger's case and through all of the support that you give me through this campaigning website, and also through the very extensive publicity that there has been for Roger over the past month since the fifth anniversary, is that we are getting messages across really powerfully about the situation facing people who are looking for justice in St Lucia.

There is this much more widespread recognition of the dangers facing people in St Lucia and the slow pace of court hearings im getting trials to the state where the judiciary and criminal court system feel it is able to take it to trial. It is very pleasing that the campaign has been able to raise awareness of these issues. It will be part of the legacy of the campaign.
Labels: Daarsrean Greene DPP Margaret Pratt Marigot murder Robert Hathaway Roger Pratt Saint Lucia St Lucia