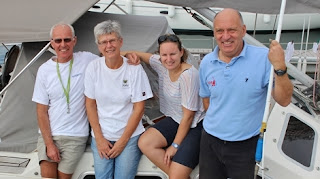 My name is Margaret Pratt and I'm writing to you once again about our campaign to gain justice for my husband Roger Pratt, who was murdered in St Lucia just over four years ago on 17 January 2014.

The latest news is that the expert witness, who needs to give an opinion on the fitness to plead of one of the defendants, once again - on Monday 22 January - declined to appear in court. That, to my knowledge, has now been outstanding for over a year.

The case, in consequence, has been deferred again until the 26 March, just before Easter. I had understood from the Foreign & Commonwealth Office (FCO) that arrangements had been made to connect to a video link. The advice I've had from my attorney in St Lucia is that wasn't the case. He was outside the jurisdiction and declined to attend.

Maybe he hasn't been paid. By the Prime Minister's own admission St Lucia is bankrupt as a country. it could be that he's just scared to give this evidence, because as we know from the statistics St Lucia is a very violent country. But it would be wrong to do that sort of speculation.

What we do know in terms of fact is he's made his assessments, four or five times I think, but he hasn't been prepared to come into court to give that evidence, either by video link or in person and each time the court gives way and defers for another two months.

And this is two months where four people are still in the correctional facility and two months further when I'm still waiting for news and action from St Lucia.

The other piece of news is that there was a hope that the Director of Public Prosecutions (DPP), Mr Daasrean Greene, would be in London to meet with a range of victims to try and sort some things out. I'm getting mixed messages about that.

I had really good news earlier this week from Mr Guy Mayers, who is the High Commissioner for St Lucia in London, to say that the preparations for the DPP’s visit are in final stages and that was great news.

I also understand from another victim that dates for that visit have been set and she had been apprised of that by the FCO. I've not been so apprised so I don't know whether the FCO plans that I shall not be invited.

Finally, there is this issue of the sensitivity of tourist marketing. I was driving back into central London on the anniversary of Roger's death to see the most enormous electronic advertising hoarding on the M4 and Westway showing St Lucia as a destination.

I understand tourism is very important to St Lucia, but the painting of St Lucia as an idyllic tourist destination, when for four years I've lived with the reality that it is something entirely different from that, and for it to feature on the anniversary of his death, it made me very sad and very indignant as well actually.

So here we are, entering into the fifth year of seeking justice for Roger. Where I'd like
to be by the end of 2018 is to have resolved this case. Unfortunately, with the glacial pace and the issues of capacity, capability and competence that have dogged this case throughout, I'm not optimistic, but as with all of the victims facing similar issues to me in St Lucia we have to fight on and we need to try to hold people to account, to make things Happen.

What we'd like to do going forward for justice for Roger is to focus more on other peoples' stories from St Lucia. What I'm hoping we'll be able to do is post some guest blogs so that other people can tell their stories about their search for justice for their loved ones, the blocks, the experiences that they've been having in attempts to obtain justice and the delays arising, so that we get a platform for more people to understand the violence in St Lucia, the problems in the justice system in St Lucia, because I know I'm just not the only one.