Inside St Lucia: the beauty and the beast of the Caribbean 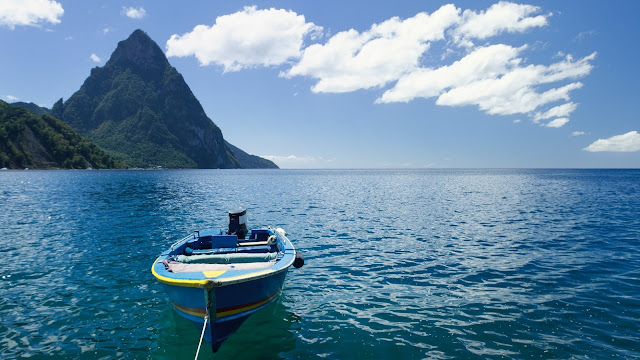 The beautiful blue seas and skies of the Caribbean, a spectacular view of St Lucia’s Petit Piton, a small boat moored close to shore. It’s a vision of a paradise that attracts 350,000 visitors a year to this small island.

But as well as being one of the world’s most beautiful destinations, St Lucia is also one of the most dangerous, with a homicide rate that rivals the most murderous places on the planet.

Located between St Vincent and Martinique in the Eastern Caribbean, this “Hawaii of the Caribbean” has amazing places, including the Piton Mountains, tropical rain forests and a drive-in volcano.

It is a frequent stop for Caribbean cruise ships and is one of the most popular honeymoon destinations for U.S. newly weds, alongside Mexico, Jamaica, the Bahamas, Italy, France and the U.S. Virgin Islands.

St Lucia’s authorities are ploughing significant sums of money into painting St Lucia as an idyllic holiday paradise, positioning it as a high-end, boutique destination to attract even more visitors and greater share of their spending.

We certainly don’t begrudge that, the good people of St Lucia rely heavily on tourism for their livelihoods. The United Nations calculates that tourists contributed US $404 million to the St Lucian economy in 2016. That is about a quarter of its GDP, or $2,349 for every resident on the island.

But for more than four years now we’ve lived with the reality that St Lucia is not entirely beautiful. The face of paradise bears an ugly scar, a scar that could destroy St Lucia’s tourism industry if it is left to fester.

St Lucia is in the grip of a violent crime epidemic and locals bear its brunt. Gun culture, gangland activity and attacks on innocents alike result in scores of murders every year. St Lucia’s overstretched, under resourced justice system is failing to cope with its spiral of decline.

Last year 60 homicides were officially recorded on the island, at a rate of 33.71 homicides per 100,000 people. That moves St Lucia to ninth place on the United Nations’ list of homicide hotspots. It is now in the same dangerous ballpark as South Africa, Belize, Lesotho and Jamaica.

It's not the first time St Lucia has made it into the highest rankings of an unwanted league table. In 2014 international cruise website – www.cruiselawnews.com - ranked St Lucia as one of the 10 most dangerous cruise destinations in the world.

Tourists who stay holed up in hotel resorts, walled compounds and cruise ships are unlikely to experience problems. Groups such as yachtspeople and backpackers, who aren’t protected by large walls and armed security guards, are more vulnerable.

We have heard stories of tourists being targeted relentlessly for ‘donations’, as well as more serious offences. In November 2017 a British tourist was robbed at gunpoint on Reduit Beach in Gros Islet. In December a couple staying on a yacht moored at Castries were assaulted, robbed and hospitalised while shopping for food at the market.

We are aware of at least five more thefts from yachtspeople in St Lucia since the start of 2018, although the real figure could be much higher. St Lucia is aware of the damage that crime can do to the island’s reputation as a tourist destination and there is pressure on victims from all levels of society to stay silent about their experiences.

There are, however, brave people that are prepared to speak out, and specialist websites such as the Caribbean Safety and Security Net (CSSN) providing intelligence and guidance to visitors. CSSN has logged 57 further crimes against yachtspeople on St Lucia since Roger’s murder onboard Magnetic Attraction in January 2014, including armed robbery and rape.

We’ve shared the story of Georgina Mortimer on this blog. Georgina was raped while holidaying with the company Girls for Sail in St Lucia in 2016. Later that year the island’s then Prime Minister, Dr Kenny Anthony, said that he feared there were serial rapists on the loose in St Lucia.

We don’t highlight these issues  because we want to damage St Lucia’s tourism industry. As Margaret has said on many occasions, the people there, on the whole, have treated her with great kindness, both before and after Roger’s murder.

But we know from our own experiences and others that bad things do happen to tourists in St Lucia and the authorities on the island struggle to deal with them.

These are not facts that St Lucia’s authorities like us talking about. We’ve been told on several occasions that highlighting St Lucia’s shortcomings would be an impediment to obtaining justice for Roger.

We want to make sure that people choosing to visit the island do so with the full knowledge of the facts. And we are determined to encourage the St Lucian authorities to make the investments and improvements that are necessary for its justice system to arrest the island’s spiral of decline and ensure that justice is done in a timely way for all victims of crime.

That is how citizens, tourists and friends of St Lucia will develop confidence to visit and invest in a country with so much beauty and so much to offer.