Hello everybody, my name is Margaret Pratt and I’m talking to you because my husband Roger was murdered in St Lucia. 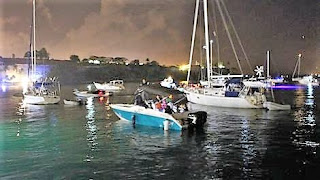 2018 started off on quite a high note. The campaign was optimistic at that stage that the authorities in St Lucia were keen to have a trial date actioned during 2018.

I met with the DPP in person in January. I like him, I respect him and I think he’s doing his best, but there are still a lot of hurdles to be overcome.

The St Lucia authorities were very good and very responsive to the developing needs of the case and they invited a further expert witness to make an assessment of one of the accused. That was in May and my understanding is that the expert has been to St Lucia and has reported.

That gave me quite a lot of assurance that progress was being made. Then, as so often, two steps forward and one step back, the courts we closed very suddenly because of security reasons. I don’t know what those security reasons were, but what it led to was that the courts in St Lucia were closed.

Since that time there has been absolutely no response at all. I’ve been trying to get in touch to find out how long the case will be delayed and when I should plan for the next steps in the process, if indeed there are any. Unfortunately I have to report radio silence.

I continue to live in hope, but now with the courts about to go into recess for the summer I’m unlikely I think to get any answers for another three or four months. Nothing is likely to happen until the autumn term when the courts reconvene.

I don’t think, realistically given the backlog that will have built up that much progress can be made over the autumn. I’d be surprised if a trial was scheduled before Christmas.

It is all very regrettable because it does mean that the fifth anniversary is approaching fast, 14 January 2019 will be the fifth anniversary of Roger’s death. From where I’m sitting here today I just don’t have any sense at all of when any progress will be made towards bringing the four people, who’ve been in jail now for four and half years, will appear before the court and face trial.

As time has dragged on and on the focus on the campaign’s concern isn’t just solely for me and for justice for Roger. It is also to recognise that the problems and challenges that I face are faced by a lot of other people in St Lucia.

I’m increasingly feeling I need to campaign on behalf of people who face similar challenges to me and also to raise awareness among the tourism community, who wouldn’t be aware from the marketing propaganda that’s put out by the St Lucian authorities just what a dangerous place it can be.

Over the next six months that work will continue to raise awareness and continue to try and improve access to justice and the speed of justice for people who visit or live in St Lucia.
Labels: Daarsrean Greene Justice for Roger Margaret Pratt Roger Pratt Saint Lucia St Lucia
Location: St Lucia