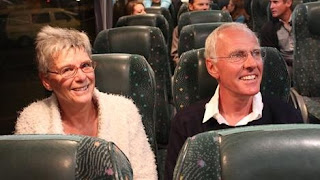 Hello everybody, my name is Margaret Pratt and I'm talking to you today to update you on the case of my husband, Roger Pratt, who was murdered in St Lucia in January 2014.

Firstly, I want to say how pleased everyone who cares about St Lucia was that it wasn't in the direct path of Hurricanes Irma and Maria, unlike neighbouring Martinique and Dominica.

Everyone feels for the suffering of the Caribbean islands that have been affected by the hurricanes. I know St Lucia is rallying around to help in every way they can.

In terms of the case, they are two particular things that have happened. Firstly, a real bolt from the blue. My attorney, Leslie Prospere, was in touch on 5th October to say that the case against those charged with, effectively, grievous bodily harm against me had been brought before the court.

Because it's the same people who were also charged with Roger’s murder, they've now consolidated the murder and the violent attack on me back into one case.

I never understood why it was two cases in the first place and think it is an eminently sensible and efficient move by the judicial authorities in St Lucia.

What I'm now waiting for is the case that will be heard on 23rd October, when once again one of the defendant's fitness to plead will be reassessed.

Last time it went into court the judge shouted at everybody because the expert witness didn't bother to turn up and the prosecution attorney didn't even have the case file with him in court.

I'm now waiting for the 23rd when I hope there will be a determination about whether this particular person has the capacity and capability to stand trial.

Earlier this week I met with the St Lucia High Commissioner in London, Mr Guy Mayers.

He was very generous with his time. I was able to express my frustration to him about the lack of progress in the case, and all the problems that have been encountered.

Mr Mayers has gone away, he wants a briefing from the Attorney General in St Lucia about the case and I'm hoping that next month, maybe I'll be able to meet with him again and have another helpful and constructive conversation with him about how the blocks and impediments that this case appears to have encountered can be cleared.

One of the things that has happened over the past couple of weeks is that the family of a murdered politician, Simone Garnier, who was murdered in 2013 have come forward with an open letter asking for a cold case review, again bringing forward the issues of police response and generally crime and justice in St Lucia.

In the last week, the 41st murder in St Lucia this year has been reported. St Lucia, with a population of 180,000 or so, continues to be a very violent place. I am optimistic though that the response of the public to our video and to this blog means that awareness of these issues are being raised and pressure is starting to come from all quarters for improvement.