Later this month, Their Royal Highnesses The Prince of Wales and The Duchess of Cornwall will visit St Lucia to mark the island’s 40th anniversary of Independence. Ahead of their visit, Margaret Pratt has written an open letter to The Prince's Private Secretary, requesting assistance encouraging officials in St Lucia to make the changes necessary to ensure that justice is done for victims of crime on the island. 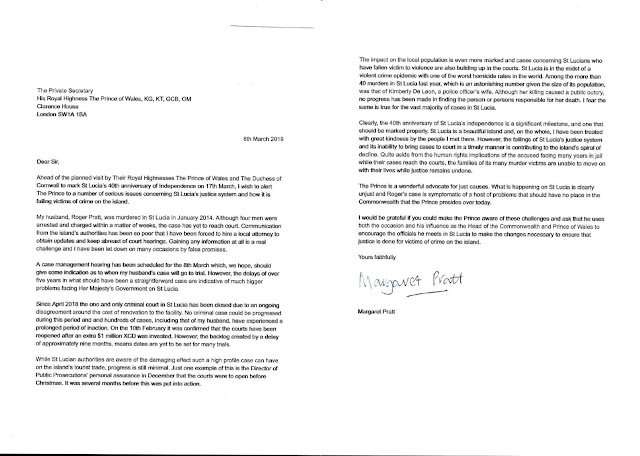 Full text of the letter is as follows:

Ahead of the planned visit by Their Royal Highnesses The Prince of Wales and The Duchess of Cornwall to mark St Lucia’s 40th anniversary of Independence on 17th March, I wish to alert The Prince to a number of serious issues concerning St Lucia’s justice system and how it is failing victims of crime on the island.

My husband, Roger Pratt, was murdered in St Lucia in January 2014. Although four men were arrested and charged within a matter of weeks, the case has yet to reach court. Communication from the island’s authorities has been so poor that I have been forced to hire a local attorney to obtain updates and keep abreast of court hearings. Gaining any information at all is a real challenge and I have been let down on many occasions by false promises.

A case management hearing has been scheduled for the 8th March which, we hope, should give some indication as to when my husband’s case will go to trial. However, the delays of over five years in what should have been a straightforward case are indicative of much bigger problems facing Her Majesty’s Government on St Lucia.

Since April 2018 the one and only criminal court in St Lucia has been closed due to an ongoing disagreement around the cost of renovation to the facility. No criminal case could be progressed during this period and and hundreds of cases, including that of my husband, have experienced a prolonged period of inaction. On the 10th February it was confirmed that the courts have been reopened after an extra $1 million XCD was invested. However, the backlog created by a delay of approximately nine months, means dates are yet to be set for many trials.

While St Lucian authorities are aware of the damaging effect such a high profile case can have on the island’s tourist trade, progress is still minimal. Just one example of this is the Director of Public Prosecutions’ personal assurance in December that the courts were to open before Christmas. It was several months before this was put into action.

The impact on the local population is even more marked and cases concerning St Lucians who have fallen victim to violence are also building up in the courts. St Lucia is in the midst of a violent crime epidemic with one of the worst homicide rates in the world. Among the more than 40 murders in St Lucia last year, which is an astonishing number given the size of its population, was that of Kimberly De Leon, a police officer’s wife. Although her killing caused a public outcry, no progress has been made in finding the person or persons responsible for her death. I fear the same is true for the vast majority of cases in St Lucia.

Clearly, the 40th anniversary of St Lucia’s independence is a significant milestone, and one that should be marked properly. St Lucia is a beautiful island and, on the whole, I have been treated with great kindness by the people I met there. However, the failings of St Lucia’s justice system and its inability to bring cases to court in a timely manner is contributing to the island’s spiral of decline. Quite aside from the human rights implications of the accused facing many years in jail while their cases reach the courts, the families of its many murder victims are unable to move on with their lives while justice remains undone.

The Prince is a wonderful advocate for just causes. What is happening on St Lucia is clearly unjust and Roger’s case is symptomatic of a host of problems that should have no place in the Commonwealth that the Prince presides over today.

I would be grateful if you could make The Prince aware of these challenges and ask that he uses both the occasion and his influence as the Head of the Commonwealth and Prince of Wales to encourage the officials he meets in St Lucia to make the changes necessary to ensure that justice is done for victims of crime on the island.