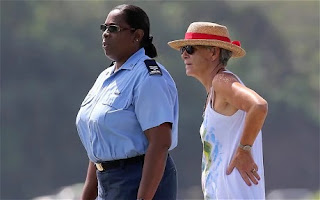 I won't say I'm looking forward to it, I can see it is going to be the most amazingly stressful thing I've probably ever done. But hey, I'm going to sit there and I'm going to fix the accused with a beady glare and I shall follow all the proceedings very assiduously. I've got an open ticket, so I will be there for the duration I hope.

In addition, I'm really pleased to hear that one of the witnesses will be Scott Davis, who was one of the people who came to my rescue when Roger went over the side, and who - with his kayak - was part of finding Roger's body and taking it to the superyacht where everything possible was done.

So I'm looking forward to seeing him too and I'm really grateful to him for coming over as a witness.

The Director of Public Prosecutions, Daasrean Greene, I'm very pleased to say is going to lead for the prosecution. The DPP has arranged for me to have a security detail attached to me when I'm in St Lucia and I'm looking forward to meeting the officers assigned to my protection when I arrive at the airport tomorrow.

So, very mixed feelings really. I'm looking forward to getting the trial out of the way. I'm not sure what it'll be like. I'm feeling far more fragile than I expected to. Its much more emotional than I expected, maybe because six years have now passed. But I will be pleased to get it out of the way.

Happy New Year to everybody. I hope this will be the year where we see final completion of Roger's case and that we get justice for Roger, and thank you all once again.
Labels: Daarsrean Greene homicide Justice for Roger Margaret Pratt murder Saint Lucia St Lucia
Location: St Lucia