Is St Lucia really one of the world's most dangerous places?

We want to thank Alicyn Ecker for her comment on the 60 HOMICIDES IN ST LUCIA DURING 2017 blog and the sympathy she expressed. We've included the comment below because she raises some excellent points and we'd like to respond properly.

Alicyn, we have said consistently on this blog that St Lucia is a dangerous place and we agree that it would be irresponsible to do so without credible sources. We have very credible sources to justify our claims.

This blog focuses primarily on the case of Roger Pratt's murder in Vieux Fort St Lucia in 2014, and we have also shared the experiences of Georgina Mortimer, who was raped on holiday in St Lucia, and Anne Pearson, whose mother was murdered on the island.

Beyond these personal and very powerful stories, we have shared information from the Caribbean Safety and Security Net, which - the last time we checked - had logged well over 100 crimes against yachtspeople in St Lucia, including armed robber, murder and rape.

The most significant source, however, is the United Nations Office on Drugs and Crime (UNODC). Its latest analysis reveals that St Lucia had the 17th highest homicide rate in the world (21.56 per 100,000 people). UNODC figures use data from 2012, a year in which there were 39 homicides on the island. 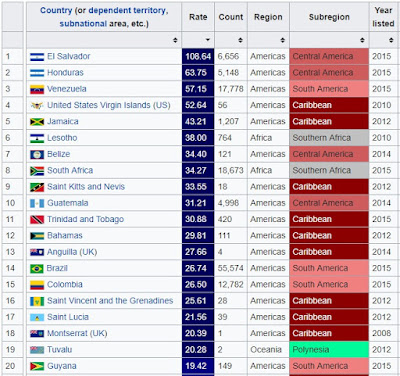 Last year there were 60 homicides recorded in St Lucia. By our reckoning that is a homicide rate of 33.71 per 100,000 people. With all other things being equal, that puts St Lucia amongst the top 10 most dangerous places on earth.

This saddens us because, as Margaret has said on several occasions, St Lucia is a beautiful place and the people there, on the whole, treated her with great kindness. We are not hateful towards St Lucia and we don't want to damage its economy.

We fully accept that tourists who stay in hotel resorts, walled compounds and cruise ships are unlikely to experience problems, but we know from our own experiences and others that bad things do happen to tourists and the authorities on the island struggle to deal with them when they happen. We want to make sure that people choosing to visit the island do so with the full knowledge of the facts.

We seek justice for Roger Pratt and we also seek to shine a spotlight on the problems in St Lucia's justice system that means the victims of crime and their families have to wait years and years for justice (if it comes at all). We are very much aware that people in St Lucia bear the brunt of its violent crime epidemic and the challenges associated with its overstretched justice system.
Labels: Anne Pearson Caribbean Caribbean Safety and Security Net CSSN Georgina Mortimer Gloria Greenwood Justice for Roger Margaret Pratt murder rape robbery Roger Pratt Saint Lucia St Lucia
Location: St Lucia